Startrail, Infrastructure for Art Distribution and Evaluation, Is Now Live on the Ethereum Mainnet

Startbahn, Inc. (hereinafter Startbahn) is incredibly excited to announce that Startrail, the infrastructure supporting the fine arts ecosystem, is now live on the Ethereum mainnet. As of now, more than 100 artworks are registered on the Startrail. We will continue working hard for its further use. 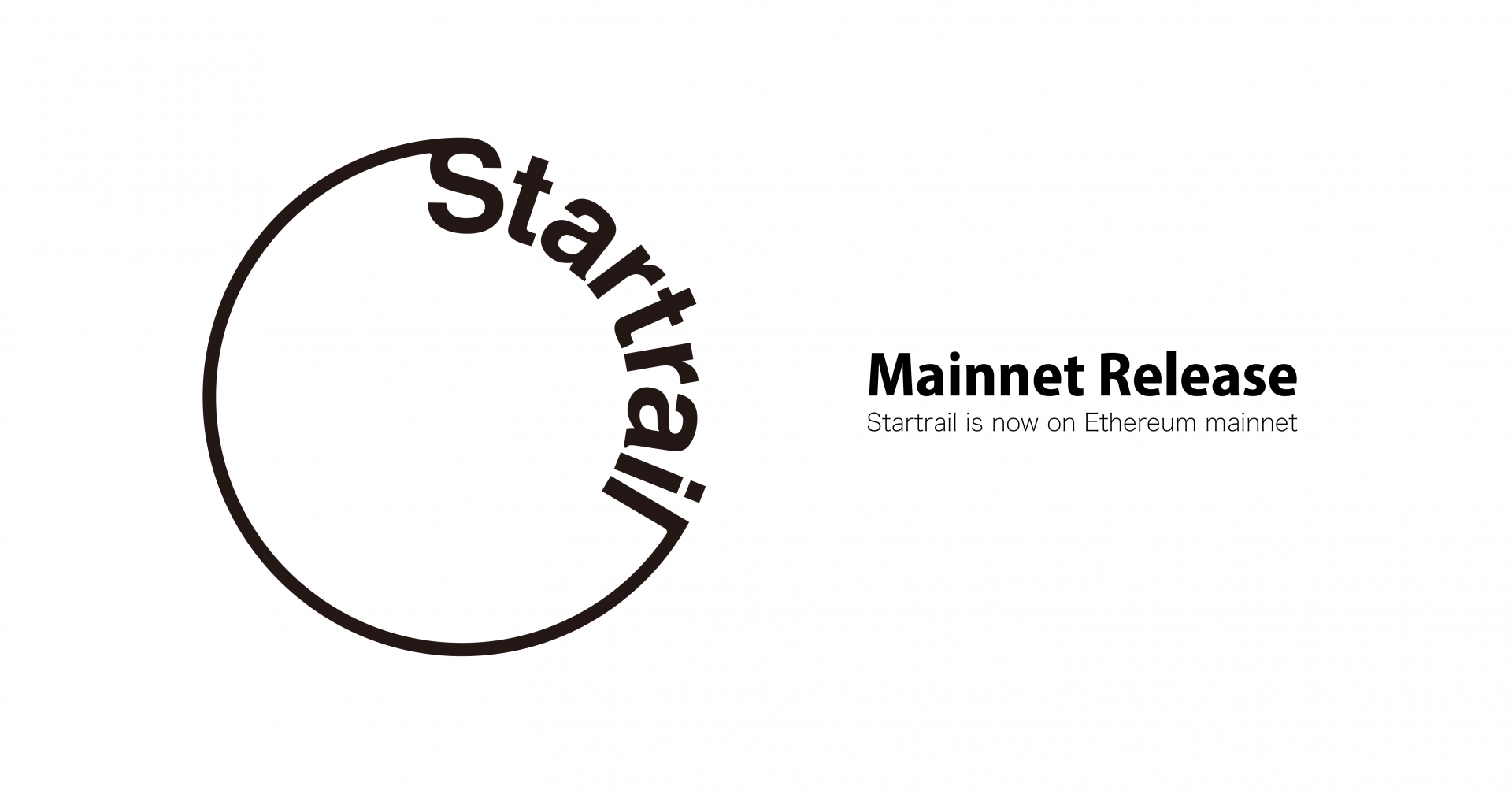 Startrail is an infrastructure supporting the development of the fine arts ecosystem by furthering its trust and credibility with blockchain technology. Its design and governance structure focuses on its social implementation and public nature, and is specifically designed not to undermine the credibility and value-creating processes that the art industry has built up over the course of history.

After going through the demonstration period for more than a year and a half, we released Startrail to several testnets to improve the system and refine it to detail. On August 25th, Startrail was finally released on the Ethereum mainnet. 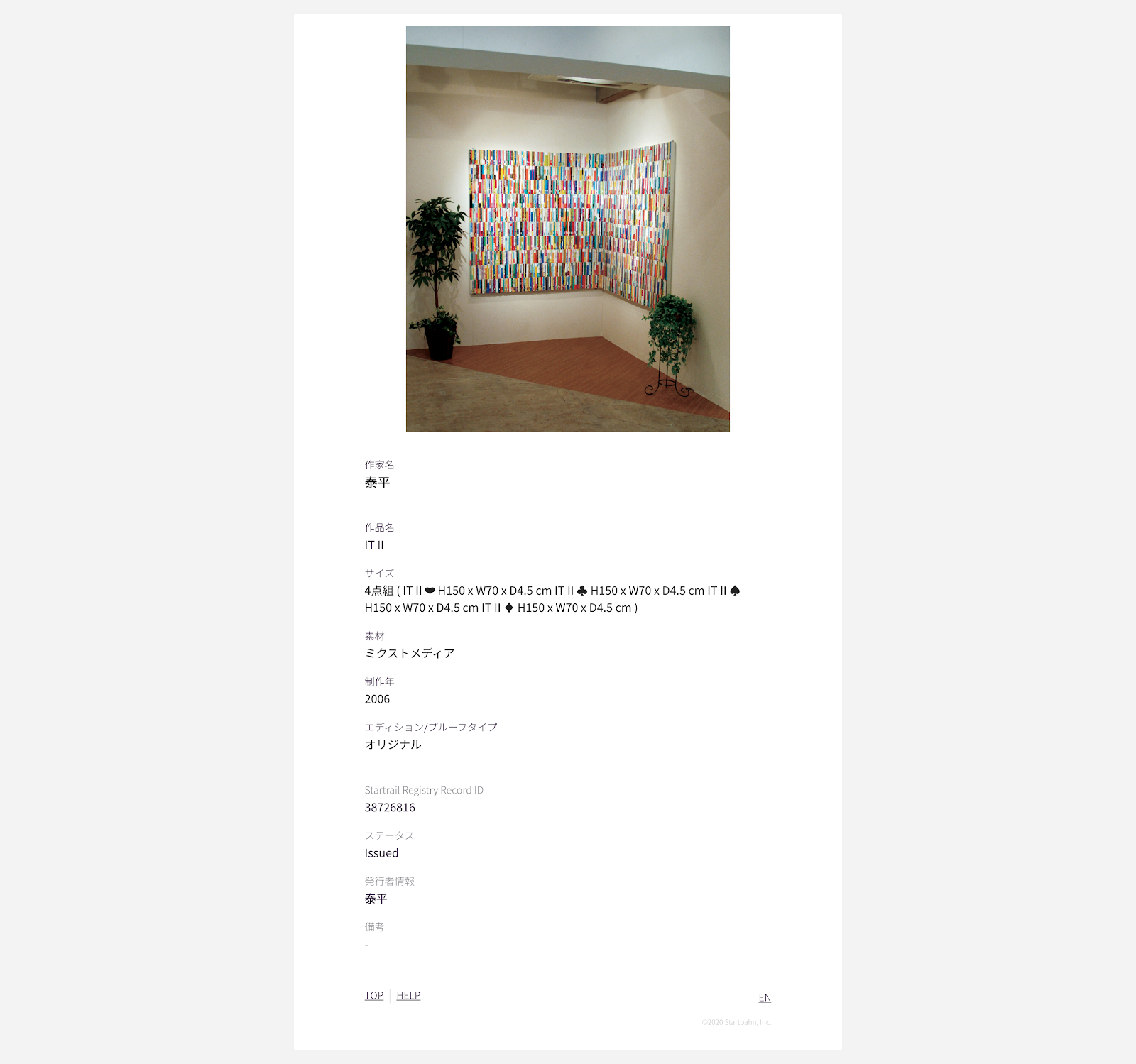 The UI of Startbahn Cert.: Registered Information of “IT II” 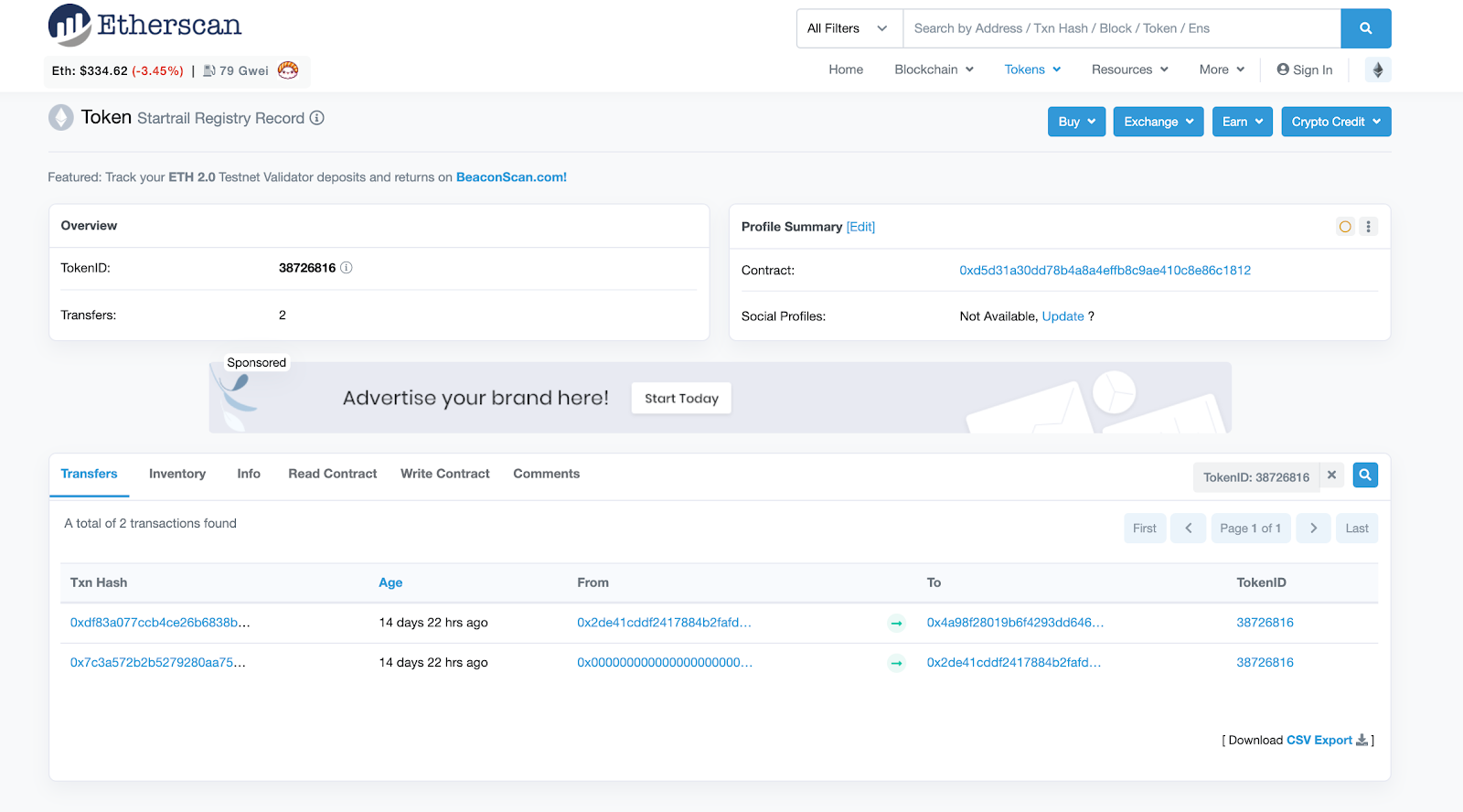 The UI of the Ethereum where you can see information of the registered artworks
You can check that “IT II” is actually registered on the Ethereum by making sure that “Startrail Registry Record” on the Startbahn Cert. and “Token ID” on this screen is matched.


◾️ Structure and Operation of Startrail

We have already released the white paper for Startrail, disclosing details of the structure and operation of Startrail. Here are some important points:

Startrail is constructed to comply with the standard interface of ERC721, one of the smart contract standards, to increase its interoperability with other services using blockchain. In the early stages of its development, its structure was high in originality and individuality. However, after we had considered the current popularity of Dapps and the situation of solution development, we have decided to build Startrail by using ERC721 standard. We are committed to user benefits, and aim to develop Startrail as an ecosystem that works with various services and operates on a broad scale.

Startrail is designed to allow continuous improvement after the mainnet release, while smart contracts, in principle, are impossible to change once they're on the blockchain. The hallmark of blockchain is its falsification resistance; Startrail is constructed to maintain upgradability while keeping it tamper-resistant. We do this by storing and managing the logic, and information which needs protection separately. Startrail also employs a highly flexible data structure that allows new logic and information structures to be added in the future.

The reliability of the public chain is ensured by the transparency of its information recording and management. Meanwhile, it is not possible to choose who has the access to information on the public chain, which is not appropriate for protecting privacy. To solve this issue, the information recorded on Startrail and on the various services connected to Startrail are completely separated. Information that needs to be shared across services, such as the basic information about the artwork itself and rights on its distribution and use is managed on Startrail. On the other hand, private information such as the owner's personal information is subject to the privacy policy and terms of use of each service, and will be managed only within the service.

Public chains have a strict limit on the amount of data that can be stored, and is not suitable for storing large files such as images or videos. Therefore, we separate the data recorded on blockchain and the data recorded on a server managed by Startrail. Files and data that should only be accessed by the appropriate rights holders, not just large files, are also stored on the server. The rights information recorded on blockchain will control the access to these information.

Many have been talking about the number of transactions on Ethereum reaching its highest level in the last 10 months (as of July 2020). This has led to a steady increase in the use of blockchain for real use rather than speculation. Startrail is not committed to operating on Ethereum, and we plan to adopt the most appropriate blockchain from time to time. As for now, considering the power of such popularity, we believe that Ethereum is the best option for Startrail.

◾️ Management by The Startrail Consortium

To ensure its independence and fairness, Startrail will be operated by “The Startrail Consortium,” a voluntary organization led by Startbahn. In the future, we plan for this consortium to be jointly led by multiple experts, companies, and organizations. If your company is interested in using or operating Startrail, please contact us at the address below.

Startrail is an infrastructure supporting the development of the fine arts ecosystem by furthering its trust and credibility with blockchain technology. By issuing Startrail Registry Record that records artwork information, an issuer can manage the distribution of the artwork such as recording its provenance across all stakeholders involved in the distribution. Startrail also enables artists to automatically execute their own rulesets regarding the distribution and usage of their work as well as the royalty-type revenue on the secondary distribution by every transaction.

Startbahn is a company that aims to realize a richer society by providing the technology needed by artists and people involved in art all over the world. We are promoting the development of Startrail, a blockchain infrastructure for art distribution and evaluation. After receiving a variety of valuable feedbacks on Startrail from our partner businesses in the art industry and releasing its white paper in October 2019, we have released Startrail on the mainnet in July 2020.
https://startbahn.jp/en/


◾️ For Inquiries About This Release